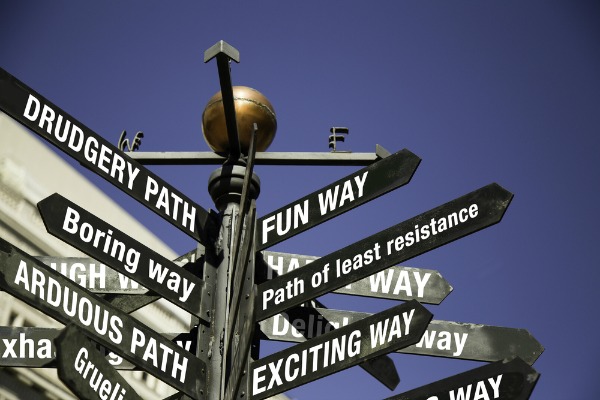 Leveraging the Path of Least Resistance to Get Results

We all know people who seem to easily get what they want in life. It used to baffle me until I learned three principles that facilitate the realization of vision. I learned them 20 years ago and have been teaching them to others ever since in my workshop, Cascade Your Leadership. During this time, I have heard remarkable stories of individuals and organizations manifesting their desires as a result. Beyond merely stating what you want which surprisingly many people and teams don’t do, your vision must embody these three principles: The Path of Least Resistance; Creative Orientation; and Creative Tension. Understanding the first is the focus of this newsletter.

The path of least resistance describes the physical or metaphorical pathway that provides the least resistance to forward motion by a given object or entity, among a set of alternative paths. More simply stated energy goes where it is easiest for it to go.

If you are parent, you understand this well. Right after you say to your three-year-old, don’t spill the milk, you watch the milk topple over, run down the table, and onto the floor. Although I can’t reference scientific proof, I believe this happens because the three-year-old brain is still developing and doesn’t process the true intent of the request as quickly as the adult brain can. Consequently, the first thing the brain responds to is the positive aspect of the command, and “spill the milk” becomes the order it enacts. When my daughters were three, I liked to say, “hold onto your milk with both hands.” This seemed to work better and we stopped crying over spilled milk.

So how does this relate to getting what you want while using less energy? Let’s think of the command “Don’t spill your milk” as a metaphorical mathematical equation. In Equation A there are two steps,

Step 1:  The brain sees the positive, spill the milk.

Next, again making it simple, let’s assume that each step requires brain energy of 1 unit.

Now, let’s apply our metaphorical mathematical analysis to a different command, the one I used with my three-year-olds. Equation B, “Hold onto your milk.”

Step 1:  The brain sees the positive, hold onto your milk.

Step 1: + (no further instruction) = unspilled milk or milk still in the cup, hurrah!

Requiring only 1 unit of brain energy, Equation B requires less energy than Equation A which requires 2. Tah Dah!  This is how you get what you want while using less energy.

Sounds too simple?  Feeling a little skeptical?  Pretend that it is true and apply it to how you live your life.  In the current economy, how many of us haven’t thought, “I don’t want to lose my job.” And, we put our energy into “Don’t lose my job!” Think first about the instruction we have just given our brain. First, the brain has to understand “lose my job.” Hmmm, probably not the best place to focus the brain’s energy in the first place, then it has to use the second unit of energy on DON’T!

The better instruction is “Keep my job.” It expresses what you truly want, is framed in the positive, and uses less energy in the process. Wouldn’t you rather spend your time and energy focused on what you actually want versus what you don’t want? To learn more read, Robert Fritz’s The Path of Least Resistance. Fritz applies this law to creativity. The Path of Least Resistance is a foundational tool in getting more of what you want in life.

Apply this principle to what you want or your vision of the future and see how it works for you.